Stauffer Library is one of the most significant building projects in Queen’s history. Designed by Kuwabara Payne Mckenna Blumberg, and opening in 1994, the $48-million facility was a Queen’s Challenge Campaign initiative funded by the Ontario government and the private sector.

The library is named in honour of Joseph S. Stauffer, a graduate of Queen’s (BSc 1920) and a generous benefactor. The largest donation toward the library came from his foundation, the Joseph S. Stauffer Foundation. In 1997, Stauffer Library was awarded the Governor General’s Award for Architecture. Today, students mention Stauffer Library as one of the reasons they chose Queen’s and a place they love throughout their studies here. 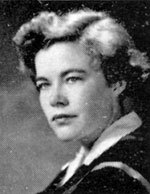 The daughter of an Albertan wheat farmer, Mary Elizabeth Skeith graduated with an undergraduate degree from Queen’s in 1950 and went on to McGill University before returning to Queen’s to work in the Library.

As Chief Librarian, she helped develop a first-class environment for scholarship and teaching, and built many friendships with faculty, staff and students. Today, her bequest to the Hugh Watson Library Endowment Fund honours her important work and dedication while supporting the ongoing development of the Library’s facilities and services.

Library collections are at the heart of the academic enterprise and our generous donors keep them healthy. A good example is the Dora Helen Stock Memorial Fund, established for the purchase of information resources in French and German language and literature.

The fund is used to support the acquisition of specialized or costly materials that the Library could not otherwise afford. Recent acquisitions include Encyclopaedia Universalis, a France-based French-language general purpose encyclopedia similar to the Encyclopedia Britannica. The website includes the Encyclopedia, a dictionary, an atlas and special featured articles and subject guides. This has long been on the wish list of French studies scholars.

The Liz Fox Memorial Endowment Fund was established with a bequest gift made to the University in 2009 by the Estate of Elizabeth Fox, B.A. (Hons.) 1973, and additional gifts by friends and colleagues in her memory.

The fund was established to memorialize a greatly respected and much-missed colleague, and to honour her commitment to staff. Thanks to the original gifts and new ones annually, the endowment continues to grow to support staff development and training in the ever changing world of electronic information resources and services. Library staff member Kim Bell, who was awarded funds from the endowment to attend a copyright conference in 2012, says “I came away from the conference with a lot of information, and a much better understanding of C-11, fair dealing, Access Copyright, and how this impacts the Queen’s community. I would like to thank the donors to the Liz Fox Memorial Endowment Fund for allowing me the opportunity to attend this conference.”

Donate to the Library