Join Us as We Mark Treaties Recognition Week 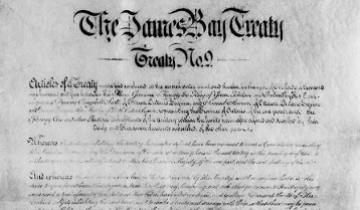 Treaties Recognition Week is the first week of November every year. This year it is November 5 - November 9.

As part of its commitment to rebuilding relationships with Indigenous peoples based on trust and respect, Ontario hopes to honour treaties as they were originally made out to be agreements between independent, self-governing nations meant to deliver mutual benefits. In order to advance reconciliation, Ontario intends to bring attention to the wrongdoings of previous generations and is committing to changing the future.

In 2018, Queen’s University Library will make Treaty 9 the focus of its displays and events for Treaty Recognition Week. Queen’s has a special connection to Treaty 9; the Archives holds the MacMartin Diaries, which are now central to litigation on proper interpretation of the treaty.

To find out more, check out our print display in the Law Library and our digital display at https://guides.library.queensu.ca/treaty-recognition-week-2018-treaty-9.

We are holding our 36th Annual Archives Lecture on the Thursday of Treaties Recognition Week (November 8), "Indigenous Stories from Queen’s Archives: The Daniel MacMartin Diary and the Original Oral Promises of Treaty 9” by Murray Klippenstein.

The focus of the lecture is the MacMartin diary, which was kept by provincial government representative Daniel MacMartin as he travelled with other treaty commissioners to Indigenous communities to procure signatures for Treaty 9.

Additionally two exhibits, “Classroom resources for Treaty Recognition Week, K to 12”, will be displayed at the Education Library and “Decolonizing Ways of Knowing: The Map” will be displayed in Stauffer Library.