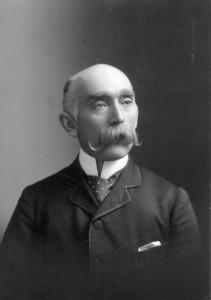 During the second National Day for Truth and Reconciliation, Dr. Peter Henderson Bryce was honoured as an early whistleblower on the horrific conditions and abuse Indigenous children were being subjected to in Canadian residential schools. In his role as a Medical Inspector for the former Department of the Interior and Indian Affairs, Bryce inspected residential schools in western Canada.

In a resultant 1907 report he emphasized the impact poor sanitation at the schools was having in the tragically high rate of tuberculosis infections and child deaths. Bryce’s report included recommendations to improve conditions at residential schools, as he believed many of the deaths occuring within them were preventable. The Bryce Report and its recommendations were ignored, and Bryce himself was subsequently ousted from public service. In 1922, Bryce wrote The Story of a National Crime: An Appeal for Justice to the Indians of Canada, which included evidence of pediatric death and disease in residential schools, and documented the government’s failure to act on his 1907 report.

In recognition of Dr. Bryce’s commitment to truth-telling, a plaque commemorating his work was placed in front of the building of his publisher in downtown Ottawa. The plaque was funded by the First Nations Child & Family Caring Society. The location, 61 Sparks Street, is part of the organization’s “Reconciling History” walking tour.

Queen’s University Library is currently hosting an exhibit on Dr. Bryce in Bracken Health Sciences Library. The exhibit is called Peter Henderson Bryce: a Man of Conscience, and is one of several travelling exhibitions from the Legacy of Hope foundation. An additional Legacy of Hope exhibit entitled A National Crime: Canada’s Indian Residential School System is also currently on display at the Education Library. A National Crime explores the impact of residential schools from their creation to decommissioning and their enduring legacy for survivors, families, and commnuities.

You can read more about Dr. Bryce via the First Nations Child & Family Caring Society website.