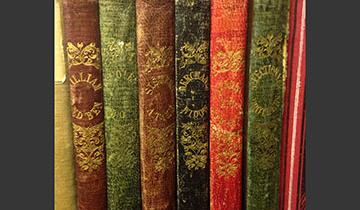 Richard Cartwright Jr. was one of the first United Empire Loyalists to settle in Kingston. He and his descendants were prominent in early Canadian public and professional life. Richard's son, The Hon. John Solomon Cartwright (1804-845) studied law, entered business and became first President of the Commercial Bank, Kingston. Elected to the Legislative Assembly of Upper Canada in 1836, he also served in the legislature of the United Provinces.

The Cartwright Collection is an example of a typical 19th century gentleman's library. The content relates to history, politics, literature, law, philosophy, religion. The collection also includes a number of bound volumes of pamphlets (1830s), a few family photograph albums and volumes of piano music.

Items from the Cartwright Collection are listed in the library catalogue.. There also is a print checklist of the collection, available in the Jordan Library.

Note: There is a considerable collection of Cartwright family papers in the Queen's Archives.