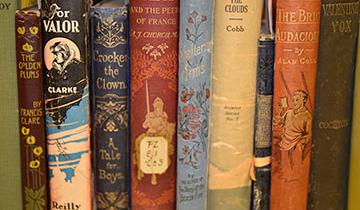 Collection Type:
Location:
W.D. Jordan Rare Books & Special Collections
Special Collection:
Yes
This collection is an amalgam of a number of donations and purchases over the years, beginning with the 1944 gift of about 50 volumes from Harry Hereford. By 1966, with the addition of donations by Elizabeth Gray, John E. Gow and Wilfred Knight, the collection had grown to approximately 600 volumes. It now numbers more than 2000 volumes. The aim of the collection has been to represent the development of the genre (mostly in English) up to the end of the 19th century.