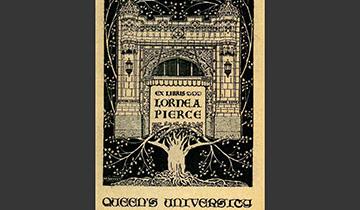 As an ordained minister, a founding member of the Canadian Authors Association, the Bibliographical Society of Canada and the Art Gallery of Ontario, a member of the Champlain Society and the Arts and Letters Club, a Fellow of the Royal Society of Canada, literary executor for Bliss Carman, private book collector specializing in Canadiana, and editor of the Ryerson Press from 1920-1960, Dr. Pierce had a broad knowledge of Canadian history and culture and of the book industry. He edited the Makers of Canadian Literature series and the Ryerson Poetry Chap-books and knew many of the early Canadian poets personally. Dr. Pierce was eager to build a strong Canadian collection at his alma mater.

Although Queen's Library had been building its Canadiana collections since the Library's inception, it was due to Edith and Lorne Pierce's generous benefactions that Queen's became an internationally known centre for Canadian studies. Pierce began donating books to Queen's around 1925 and provided advice and some funding towards purchases thereafter.

An endowment fund was established in 1961 shortly after his death and Lorne Pierce's private library and papers - including the Ryerson Press correspondence and the papers of Bliss Carman - all came to Queen's.

Canadian Literature: The substantial literary collections include the works of Bliss Carman, Major Richardson, Charles G.D. Roberts, William Kirby, Archibald Lampman, Thomas Chandler Haliburton, F.P. Grove, as well as the Ryerson Poetry Chap-books and the complete output of the Oberon Press. The Lorne Pierce Collection also incorporates a number of sub-collections which are often, but not always, shelved together within the main classification sequence. Examples of this sort are the libraries of John Glassco, George Whalley, Mazo De La Roche and Alexander Watt, theosophist.

Canadian History: In addition to the wide range of print resources in English and French Canadian literature, the Collection also includes historical works relating to the discovery, exploration and early settlement of this continent, and the influx of United Empire Loyalists, the role of Major John Richardson (1796-1852) and the War of 1812, the opening of the West, Arctic, and native people.

The Edith and Lorne Pierce Canadiana Collection now numbers about 100,000 items. Building on our considerable collection strengths, we place an ongoing emphasis on collecting historically-significant and rare Canadiana, a cross-section of contemporary Canadian literature, and local histories,