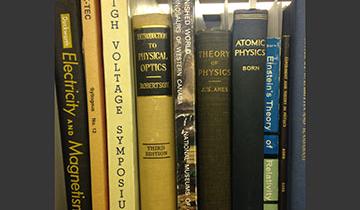 Upon seeing the McNicol Collection, History of Telecommunications, at Queen's, Arthur Covington, who also recognized the importance of collecting and documenting the history of science, was inspired to continue building his own collection, which was donated to Queen's gradually over the decades since 1973. The Riche-Covington Trust was also established at that time. Thanks to the generosity of the Covington family, a considerable amount of material has been added since Arthur's death in March 2001 and that of his wife, Charlotte (Riche) Covington (2002), herself a scientific scholar of some note.

Covington initiated the "History of Radio Science and Technology Project" at Queen's in the 1970s, procuring the papers of many prominent scientists in the field. Arthur began by donating the papers of Arthur L. Riche, father-in-law of Mr. Covington, who developed the snap action Micro Switch which was later used in the 200-inch telescope at Mount Palomar, California. Included also are papers from Maurice Bachynski, Borden Clarke, B.W. Currie, J.E. Kennedy, and Queen's colleagues, V.A. Hughes and Alice Vibert Douglas (once Dean of Women, biographer of Sir Arthur Stanley Eddington and advocate of an increased role for women in science).

The Riche-Covington Collection includes correspondence, conference proceedings, technical papers by Covington and other researchers, an extensive photograph collection, scrapbooks, broadsides, as well as contemporary monographs and some very rare books on the history of optics and scientific method. A Catalogue of the Riche-Covington Collection was compiled by Barbara Teatero and Leslie H. Morley in 1984.

A pioneer in radio astronomy, Arthur E. Covington (1913-2001) was born in Regina and grew up in Vancouver where he graduated from radio school. He went to work as a radio technician on Canadian National ships and eventually earned a master's degree in physics and mathematics from the University of British Columbia. He was studying at the University of California at Berkeley when he was invited to join the National Research Council in Ottawa in 1942 as a radar technician.

Covington built the first Canadian radio telescope for solar research to read electromagnetic signals sent from the sun. Covington's discovery, during the partial solar eclipse of November 23, 1946, that microwave emission was far more intense from the vicinity of sunspots than elsewhere on the sun, was the first indicator that magnetic fields were important in the generation of nonthermal cosmic radio emission. Covington inaugurated at the National Research Council of Canada daily measurements of the solar microwave flux at a 10.7 cm. wavelength. Measuring the variation in solar magnetic activity is significant in relation to a wide range of human activity. These measurements continue to the present day.