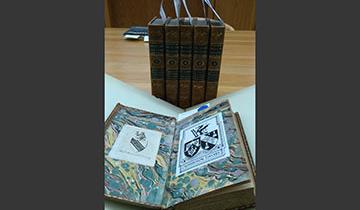 Born and raised in Ontario, Davies was educated at Upper Canada College, Queen's University at Kingston and Balliol College, Oxford. During his time in Kingston, he cultivated his interest in journalism as an active contributor to The Journal, the Queen's University student newspaper. Robertson Davies had three successive careers: as an actor with the Old Vic Company in England; as publisher of the Peterborough Examiner; and as a university professor and founding Master of Massey College at the University of Toronto. As a novelist, he gained worldwide fame for The Salterton Trilogy, The Deptford Trilogy, The Cornish Trilogy, Murther & Walking Spirits and The Cunning Man.

The Collection Comprised of more than 5000 volumes, theatre prints and ephemera, this remarkable collection reflects Davies' interests in literature, literary criticism, art, music, theatre, theatre criticism, theatre biography and autobiography, film, drama, history and psychology. Many of the volumes are annotated with handwritten notes inserted. Particular strengths are in 18th, 19th and 20th century theatre books and prompt copies. Items in this collection are either signed or first editions. The items will be shelved according to room order in which they were kept at Windhover, Davies' country home in Caledon Hills.

All items can be located in the finding aid.

The Robertson Davies collection has been preserved in its entirety and made available to the public through the generosity of Hugh Anson-Cartwright in memory of Reginald Anson-Cartwright (Queen's School of Mining, 1904), and through the support of the Chancellor Richardson Memorial Fund.