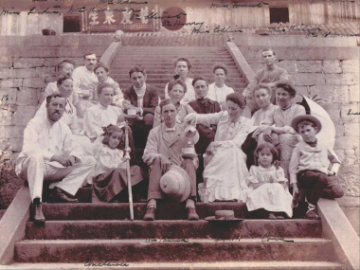 This fascinating exhibit of archival photos and stories covers 60 years of Canadian Missionary work in China. The exhibit is a gift to Canadians from a group of Chinese historians, artists and corporate donors. They began collecting and curating the “Old China Photo Project” in 2007 to explore a history lost during China's post-revolutionary period. The result is a fascinating pictorial record which recognizes and appreciates the Canadians who made Sichuan their home over 100 years ago. Many of these professionals contributed significantly to the medical and educational modernization of China, and all left a lasting footprint and a long legacy of friendship.

The exhibit highlights the establishment of what is today the West China Union University in Chengdu. This modern university includes the first Faculty of Dentistry in China, Faculties of Medicine and of Pharmacology, numerous teaching hospitals as well as liberal arts and science faculties.

Although the missionary presence ended with the founding of the People’s Republic of China, the story did not end there. Hundreds of Chinese have graduated from the West China Union University and went on to contribute to the development of a modern health care system in China. Today, West China Medical Centre at Sichuan University is one of the largest health care teaching centers in China.

This story shines a light on an important part of the history of Canada-China relations. It celebrates a long and enduring friendship between our two peoples, supported by the descendants of those Canadian missionary families and the Chinese alumni of the University.