On-Campus Events for National Day of Awareness for MMIWG 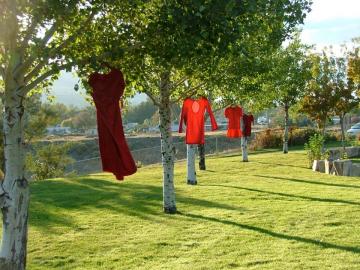 On Thursday May 5th, in recognition of the National Day of Awareness for Missing and Murdered Indigenous Women and Girls, there will be a red dress installation on campus. Additionally, there will be an Elder Meet & Greet on this topic. This event is open to all, and those who wish to attend are asked to register.

On Thursday May 12th, in support of the Moose Hide Campaign, the Office of Indigenous Initiatives has planned an advocacy walk at 3 pm. Participants will gather at Tindall field around 2:45 pm, and then commence the walk at 3 pm, to Agnes Benidickson Field. At the end of the walk there be remarks by  members of the Queen’s community. Similarly to May 5th, there will be an Elder Meet and Greet session on this topic at 12 pm prior to the walk. Registration will be available on the Office of Indigenous Initiatives website later this week.

In Canada, Indigenous women and girls are targeted for violence more than any other group, and are 12 times more likely to go missing or be killed.

In 2019, a national inquiry described this ongoing crisis in Canada as a genocide. The in-depth report found that missing and victimized indigenous women and girls are frequently stereotyped or stigmatized, with their family’s concerns dismissed.

Despite the severity of the ongoing situation, an endemic lack of awareness, compassion and meaningful action still characterize the plight of so many indigenous families still searching, and grieving for sisters, aunts, mothers, daughters and grandmothers who are missing.

The REDress project was inspired by the work of Metis artist Jaime Black who, in 2010 put up installations of red dresses in Manitoba to represent Indigenous women and girls lost to violent crimes.

Black described the installation and its intent on her website: "The project focuses on the issue of missing or murdered Aboriginal women across Canada. It is an installation art project based on an aesthetic response to this critical national issue. The project has been installed in public spaces throughout Canada and the United States as a visual reminder of the staggering number of women who are no longer with us. Through the installation I hope to draw attention to the gendered and racialized nature of violent crimes against Aboriginal women and to evoke a presence through the marking of absence."

Please see the WSANEC Leadership website for more information and resources on the National Day of Awareness for Missing and Murdered Indigenous Women and Girls.