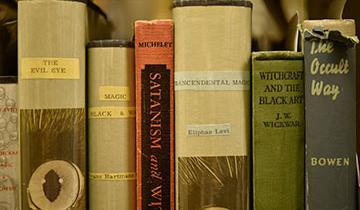 The Watt Collection consists of books about theosophy and occult and related topics. This material was originally collected by Alexander Watt of Waterloo, Ontario. According to Dr. Dena Bain Taylor, Proprietor Ben Abraham Books:

"He was a real estate agent with a wide circle of acquaintances. He was a prominent member of the Theosophical Society in Kitchener for approximately twenty years, in the 1940's and 1950's. In addition, he was apparently a Rosicrucian, belonging to both the English and American organizations. Finally, he was obviously a member of the O.T.O. (Ordo Templi Orientis), the magickal [sic] order formed by Aleister Crowley when he broke away from the Hermetic Order of the Golden Dawn, and headed by him until his death in 1947. Watt, whose Order name GADA... appears frequently in the books, knew Crowley, who acknowledged his work for the order by giving him one of twenty special copies of his work OLLA (now contained within the collection).

The collection covers several subjects: alchemy, mysticism, Freemasonry, Christian Kabbalah, astrology, theosophy, and other occult topics. Works from several occult figures of the 19th and 20th centuries are present including: Blabatsky, Crowley, Yeats, Machen, AE, Waite, MacGregor Mathers, Westcott, and Regardie. Additionally, there are some earlier works such as the early 17th century kabbalistic treatise by Martellus, a first edition [1714] of Montfaucon's Comte de Gabalis, and an early edition of the prophecies of Nostradamus(Taylor).

The collection was presented to Special Collections in 1989 by his son, Hugh T. Watt. An inventory of the collection is available through Omni.