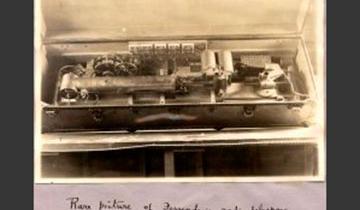 Collection Type:
Location:
W.D. Jordan Rare Books & Special Collections
Special Collection:
Yes
Donald Monroe McNicol (1875-1953) was a Canadian-born railway telegrapher who rose to become President of the Institute of Radio Engineers, Chairman of the AIEE Publications Committee, editor of the journal Telegraph and Telephone Age, author of numerous scientific and historical articles, and lecturer at Yale. McNicol's private library, held in the Jordan Library, is extensive. The collection, which numbers approximately 1200 items, contains books, pamphlets, journals and archival resources on the experimental history and development, to World War II, of the telegraphic, telephonic and radio sciences. This collection is supplemented by the Riche-Covington Collection on Radio Astronomy. Although the Jordan Library generally does not collect artifacts, an exception was made with the McNicol Collection which even includes a piece of the first trans-Atlantic telephone cable!