During the 19th and early 20th centuries, many Canadian cities and towns were devastated by fire. It was in response to this situation that fire insurance companies were established. At that time, very detailed fire insurance plan maps provided valuable data to the  companies on a building's size, its function, and its construction material, useful to gauge the risk for fire and therefore the ability to quote insurance premiums to customers. These plans were lent to the insurance companies with the strict understanding that, before receiving revised plans, superseded plans must be returned. Returned plans were almost always destroyed.

This policy helps to explain their scarcity today. But since the maps were revised periodically in order to be accurate and suitable for the intended use, those remaining provide the historical researcher with an invaluable series of neighbourhood snapshots. It is helpful to consult the book Catalogue of Canadian Fire Insurance Plans, 1875 – 1975 by Lorraine Dubreuil and Cheryl A. Woods to identify which maps of Canadian towns and cities were published in Canada from 1875 to 1975, and are held in 122 Canadian collections.

We have collected many original fire insurance plans for Canadian towns and cities. To locate these use Omni, search for Keyword “fire insurance plan” (keep the quotes). Narrow your search by adding a place name.

From February 2008 - March 2010, Library and Archives Canada embarked on a mass digitization project of fire insurance plans. Over 900 item-level descriptions and images of plans dated 1917 or older were added to LAC's website. The plans are primarily associated with the Charles E. Goad Company fond.

To locate these: Go to http://www.bac-lac.gc.ca/eng/collectionsearch/Pages/collectionsearch.aspx. In the form that opens, enter "fire insurance plan" (keep the quotes) in the Any Keyword(s) box. Refine your search by adding a place name. 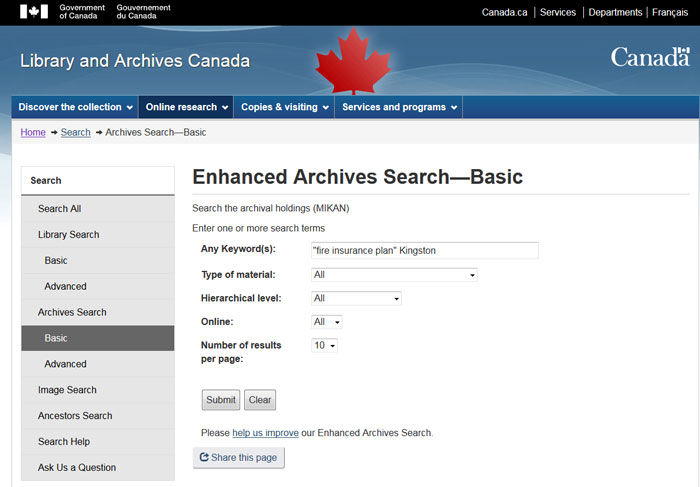 Find resources to help you get started with your research and assignments.

All Types of Information

All Types of Information

We work with researchers, learners and instructors across the disciplines to ensure they have the information resources they need.